Pandemic Diary Day 16: Not So Social Distancing, Inside Trading Scandal Starring Senator, and Tom the Cat 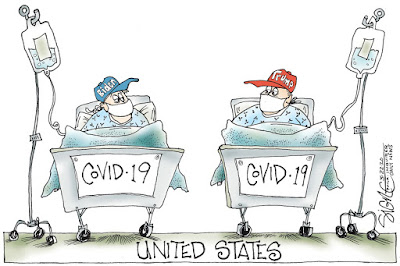 I really didn't expect the mandatory social distancing would go smoothly even though it's being done for people's safety. Americans are very independent, and stubborn, when compared to other societies.


Social distancing stories
**An 86-year-old NY woman was standing in a packed hospital waiting room where everyone was trying to keep a distance from one another. It was impossible.

She got faint while standing and gripped a pole attached to a wheelchair with a woman in it to get her balance.

The woman became infuriated and punched the 86-year old in the face, sending her crashing to the floor! The woman died four hours later. The attacker was treated for the illness she came in with and was released.

Police were notified 5 hours later, and they arrested the woman, who by the way had a history of assaults.

**A Florida Sheriff arrested a religious leader for refusing to stop holding packed church services. The pastor claimed his church was protected by some "machines," and that he could cure the state of Florida from the infection.

**A Maine man reported that armed neighbors descended on his home and chopped down a tree to block his driveway to prevent him from leaving because they thought he had the coronavirus.

When the police arrived the armed neighbors weren't there, but the tree sure was.

**Then we have the daily flaunting of social distancing when Trump and his Coronavirus Task Farce stand so close together they appear to be members of a chain gang shackled together so they can't run away!


Observations from afar
**Like the majority of Americans who are obeying stay at home orders, I'm watching anything on TV that has to do with where I live, and the nation.

**Under the society pages... a daily litany of famous people dying from COVID-19.

**Much to my surprise, the Justice Dept. is investigating Republican Sen. Richard Burr's stock sell-offs before the virus spike. As the chairman of the Senate Intelligence Committee he had inside info on when to sell, according to investigating regulators.


On the Homefront - Medford, Oregon
**The grim count: 3 new deaths in Oregon make it 16 who have died from COVID-19. We've surpassed 600 coronavirus cases in the state.

**The state's ban on self-service gas station's has been lifted due to staffing problems caused by the coronavirus. You can now pump your own gas if you're in a hurry.

Meet Tommy the Rockstar! As you can see, he's a handsome cat with a regal bearing. 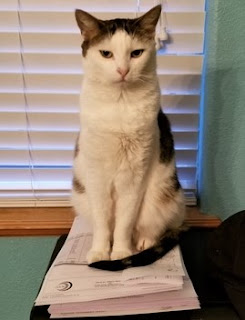 He's a cunning predator. He's our outside/inside cat and is likes to display his hunting prowess by bringing .

The other two, Bob and Oliver are inside cats. Oliver for obvious reasons - he's blind.

As for Bob... he stays inside because he's just not the brightest penny in the pack!

Tommy's other side is a sweet, get along kinda guy who is friends with everyone in the house... even Oliver whose noted for being somewhat grumpy at times.

I'm grateful to all five of our fur babies, and my vastly patient and sweet wife Shirley. The combination make for great entertainment!
at March 31, 2020