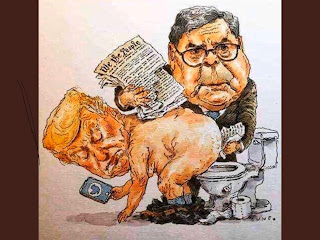 As hospitals across the country scramble for more supplies; from face masks, respirators, surgical gowns, to COVID-19 testing kits, there's another shortage many Americans are unaware of but is vital to the nations security...

Trump's signature Presidential Diapers - Trumpies - are almost gone! The warehouse supply is so low his aides and staff have appropriated funds from the new Stimulus Bill to restock it.

A WH spokesperson who asked not to be named for fear of retaliation, told me that Trump has been wearing his Trumpies full time since the Impeachment hearings began in January.

This accelerated usage, with at least six diaper changes a day, couldn't be anticipated according to Trump's new acting Chief of Staff, Mark Meadows.

**The Supreme Court has responded to the coronavirus by postponing the 2-week oral argument sessions scheduled for several cases.

On hold are two cases centered on Trump's tax returns and other financial records, sought by the Manhattan district attorney and House committee investigators.

**Gun sellers across the US are reporting major spikes in firearm and bullet purchases as the coronavirus spreads across the country. I'm not surprised to see this. We're a nation of guns, and are always ready to use them... even on ourselves!

**Right now the major COVID-19 hotspots are big cities like New York and Detroit but Healthcare officials are saying it may hit later, and harder, in rural areas.

**After passing a 2 trillion dollar Stimulus Bill Congress is already looking at another one. That doesn't bode well at all.

**In the middle of a pandemic Trump is touting the viewership his daily Coronavirus Task Farce briefings are getting, and comparing them to The Bachelor. Captive audience much?

**69 new cases of COVID-19 reported yesterday, bringing the total to 548. The good news no new deaths were reported.

**Texting tales - Shirley is texting a lot, and getting a lot of texts. She has 100s of contacts - friends and family. Lately she is rediscovering everyone and filling me in on their lives. 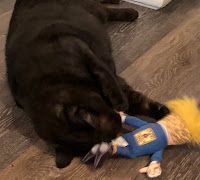 He's also the boss of the other four animals in our house who've learned to defer to him.

Oliver follows me from room-to-room like a faithful dog, always settling down by me when I sit somewhere. I'm convinced he has some kind of sonar because he seldom bumps into things. 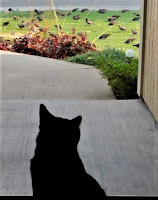 The photo on the right was taken last spring. It looks like Oliver is watching the birds on the front lawn.

He made a funny little chittering noise as he turned his right from right to left. I suspect his predatory instincts were aroused by just the sound of those birds.

I love the way he fits in seamlessly with the other animals when it comes time to eat and drink. They actually take turns. You'd have to see it to believe it.