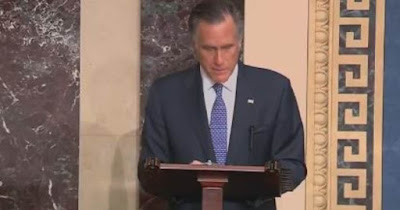 A lone Republican senator showed he had a conscience, and honored his oath to be fair and impartial. He voted to convict Trump of Abuse of Power.

History will remember this sole survivor of a once proud party who put his country first. History will also show the temporary price he paid for defying Trump, but it will also note he was the only Republican in the Senate with a spine.

Mitt Romney probably slept well last night after his historic vote. He was at peace with his God. 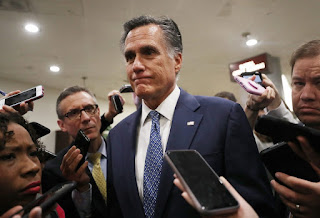 Today, he's an outcast among Trumplicans content to let Trump get away with anything.

To be clear, I was never a Romney fan.

I certainly didn't vote for him when he ran for president. But, after his heroic move to stand up for justice yesterday, I've become an admirer.

There was a senator from Utah
that cast a vote that was futile.
But in the senate hall,
Mitt broke out his balls
and left his spineless colleagues in awe!
_____________________________________
In these divisive times his courage was more than just a breath of fresh air; it was an affirmation for everyone who believes in speaking to the truth.