Hot Political Memorabilia For Christmas: #1 Seller, Trump on the Stump 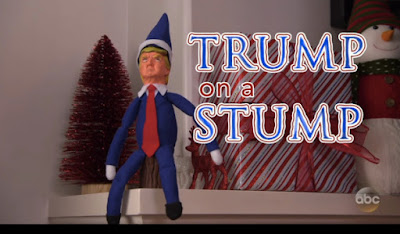 Political memorabilia is an American tradition that goes back as far as Santa Claus when he first appeared for good little boys and girls.

Since America's first presidential inauguration, when metal pins bearing the phrase "Long Live the President" and George Washington's initials were worn by his supporters, political memorabilia has been popular.

The first mass-produced and collectible buttons for presidential campaigns came out in 1896, when William McKinley ran against William Jennings Bryan.

Which brings us to Christmas 2019.

Your can still get Trump Christmas memorabilia from the Republican National Committee, or Trump's re-election campaign.

I hear that one of the hottest holiday items is "Trump on a Stump." Unlike the friendly little Elf on the Shelf, the Trump version has a hidden camera and a voice-activated recording devise.

Trump has been passing them out to GOP lawmakers in order to better monitor their every move. The damn thing is, the Republicans know it but they're too afraid to turn down his Christmas gift.

Other hot memorabilia items are the infamous Red MAGA caps from Communist China, and t-shirts made in Pakistan with forced child labor that proclaim, "Read the Transcript!"

Hot Wheels teamed up with Joe Biden's campaign and is selling a replica of the "No Malarkey" campaign bus that toured Iowa recently.

Republican senators up for re-election next year are already putting out campaign buttons announcing "I'm With Stupid," with a photo of Trump's face next to theirs.

The Democratic National Party has already sold out of "Impeachment 2019" sweaters that reportedly came out in vibrant holiday colors.

Sen. Lindsey Graham's re-election campaign is selling sets of 30 silver coins embossed with the statement, "I've already made up my mind, and don't need to see any evidence."

The Democratic National Party reported selling over 10 million reversible Moscow Mitch badges with Putin on the other side, in less than two hours on Black Friday.

That's all for now. I'll keep my eyes open for any new items that might come out before Christmas Eve. Be Merry!

Time for me to walk on down the road...
Posted by ImBlogCrazy at 5:15 AM