A Christmas Impeachment and a 'Mysterious' Gift To Trump From Kim 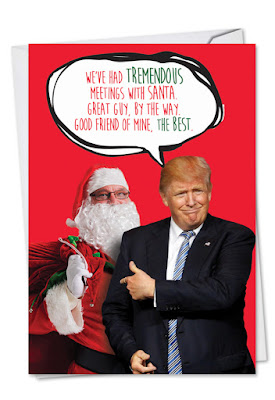 This is not a traditional Christmas this year, in case you hadn't noticed.

Parents are reading the articles of impeachment to their children instead of Christmas stories.

There's even a good chance that Christmas Day will feature Trump's impeachment by the House of Representatives.

There's rumors that Santa's workshop is experiencing trouble with the elves who want to serve Republicans with subpoenas to testify in the Senate trial, and elves who are printing up conspiracy theories to pass out against Democratic lawmakers.

His minions sent out a notice to Washington warning the Trump Administration's Christmas gift "depends on the coming days." 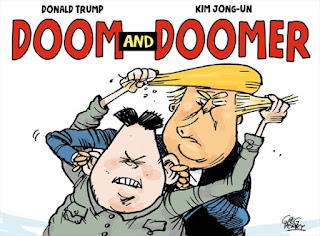 That mysterious statement certainly sounds ominous, especially since Kim has set a deadline (the end of the year) before taking some action that America isn't going to like.

Because Trump is a diplomatic moron, he dissed Kim during the NATO summit by calling him Rocket Man (remember that one?) and threatening the US could kick his rotund ass.

That, of course, didn't put Kim in the holiday spirit, and he called Trump a Dotard (another oldie but goodie).

I have a feeling Kim's Christmas gift is going to be - in Trump's own broken words - "nasty."

Time for me to walk on down the road...
Posted by ImBlogCrazy at 6:26 AM