A Conversation Between Trump and Lady Liberty 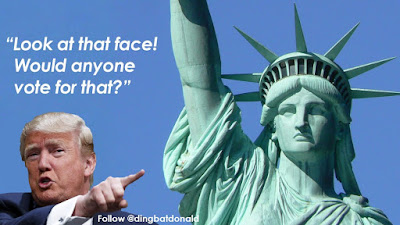 In this day and age, it shouldn't be too hard to suspend reality for a moment and imagine a conversation between Trump, and Lady Liberty.

Trump - (referring to DACA protestors) "There's a lot of hardened criminals out there..."

Trump - "I'm going to build a big beautiful wall to keep immigrants out."

Lady Liberty - "Give me your tired and poor, your huddled masses yearning to breathe free, the wretched refuse of your teeming shore."

Trump - "The courts are not helping us (him). It's ridiculous. Someone said I shouldn't criticize judges. Well, someone has to, and that's me."

Lady Liberty - "We are a democracy built upon values, the truth, and the rule of law. Our system of government has been a shining beacon of freedom for over two hundred years."

Trump - "I'm the least racist person you'll ever see, but that Mexican judge was unfair to me!"

Lady Liberty - "...We are a country that cherishes justice for all. Attacking judges is the same as attacking the Constitution."


Trump - "When you're a star you can grab women by their pussies!"

Lady Liberty - "All men and women are equal under the law, and when creeps like you commit sexual assault we have a judicial system that'll hold your kind to account."

Trump - "The #MeToo movement is a bunch of women who either aren't getting enough sex, or they're just man haters."

Lady Liberty - "Women in America are becoming more politically involved in our government and their communities. The balance they bring is making America greater."