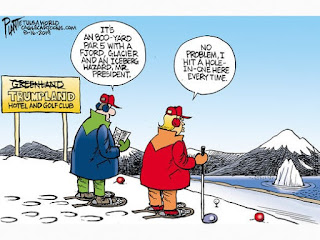 Trump didn't seem to understand that Greenland was not for sale. The semi-autonomous Danish territory in the Arctic has never been up for sale.

What Donny doesn't seem to understand is that the Danes aren't dummies. Why in the world would they ever sell such valuable real estate?

Trump's vision for Greenland was - a golf course and hotel - along with whatever valuable resources lie beneath a mile of ice.

It's just another visible sign of how delusional he is. He tweeted a photo of Greenland with a Trump Tower in the middle this morning. Here's how that went over...

Related: Greenland's Leader Rips Trump: Idea of Buying 'Territory Not Something To Joke About'