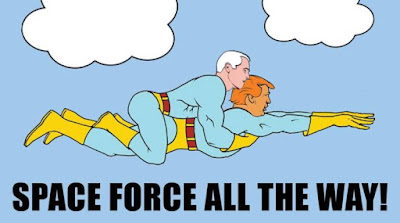 I'm having a hard time getting excited by Trump's Space Force.

The biggest suck-up in the West Wing, Pence, and Pentagon officials announced that The U.S. Space Command officially starts Aug.29th, serving as a launching pad for Trump's Space Force.

How special. Allow me to point out one big reason why we don't need a Space Force before taking care of other business, like here on earth.

For starters, the U.S. military is no longer the primary force in Asia, and missiles from China's rapidly improving military could overwhelm its bases in hours, according to a report released yesterday.

It seems pretty obvious to me that the current priority here on earth is to avoid getting our asses kicked by Communist China, and not chasing UFO's to fight with in some distant future.

Authorities in Commerce County, Colorado are telling campers they can't camp there because of colonies of prairie dogs who are invested with fleas carrying the Black Plague.

That's right. The nasty shit that wiped out nearly 60 percent of Europe once. This Black Plague comes at a particularly bad time for Phish fans who are attending the group's concert at Dick's Sporting Goods Park, and who intended to camp out afterwards. Not possible now.

** Concerned about the troubling signs of possible recession while claiming the economy is the greatest it's ever been, the orange anus is suggesting having payroll tax deductions.

His staff has been quietly researching the possibility, but Trump dumped the news yesterday... to most everyone's surprise, including senior officials. Especially Larry Kudlow, who told CNN news the day before they weren't even considering the possibility at the time.

** If Trump dumps yet another nuclear pact, the 2010 New Strategic Arms Reduction Treaty (New START) with Russia it could deal a significant blow to U.S. security.

Not content with pulling out of two other important agreements; the 2015 Iran nuclear deal; and abandoning the 1987 Intermediate Range Nuclear Forces (INF) Treaty, Trump is considering making it a trifecta of stupidity.

There's always more Trump dumps ahead as our foul-mouthed wannabe dictator flays about like a fish out-of-water every day he pollutes the Oval Office.

Time for me to walk on down the road...
Posted by ImBlogCrazy at 8:12 AM