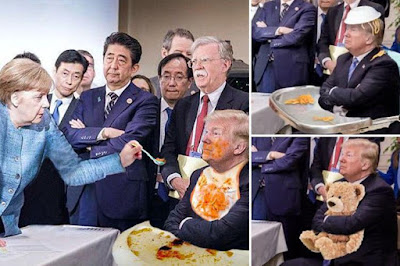 Trump at G-7 Conference-World Leaders Try To keep him from having a temper tantrum.

Trump is a man on an island, and some conservative vultures sensing his growing weaknesses, are circling overhead... ready to pounce.

Thus far, disgruntled conservatives have complained but taken no action against the "great divider" in the Oval Office. That's changed.

Enter Joe Walsh, a conservative radio show host and former Tea Party congressman from Illinois. He's decided to challenge Trump for the Republican ticket even though he knows the odds are against him. A formal announcement is expected soon.
___________________

To make it real juicy, Walsh use to be a supporter of Trump. Unlike Bill Weld, who has already declared he's running against Trump, Walsh has the ammunition to rattle Trump and make his life harder.

Being a media-trained radio-show host has taught Walsh what it takes to get under a person's skin. To prove the point he's recruiting George Conway (husband of Kellyanne Conway and Trump's biggest supporter) to play a senior role in his campaign.

George Conway has become one of Trump's most vocal critics in the last couple of years, after initially supporting him. His attacks, alongside Walsh's, will be coming from a new direction against Trump... from the right.

To recap: Trump now has the world against him because of his tariff war with China, that could trigger a global recession. World leaders at the G-7 today are walking on eggshells trying to not trigger one of Trump's tantrums while attempting to solve global issues like climate warming.

At home, Trump's losing in every campaign poll against Democratic challengers - even in the Fox News polls, which really pisses him off.

Trump is facing a dozen investigations into everything from his finances to obstructing justice. Half of Congress is ready to begin an impeachment inquiry against him.

This new challenge for Trump coming from a right-wing pundit with a big audience, might drive him over the deep end - after all, we're talking a thinning of his vaunted base.