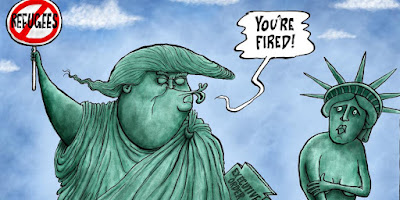 "Coffee: a warm delicious alternative to hating everybody every morning. Forever." Unknown

You've probably noticed that nothing is out-of-bounds in the era of Trump.

The truth is trampled on so often no one knows anything for sure anymore. We have a president hurling racist tropes in an effort to further divide us.

Trump's enablers/minions, in and out of government, think nothing of lying and breaking laws with impunity.

Example: FBI documents in the New York "Hush money" case (Stormy Daniels) clearly laid out the numerous contacts that Hope Hicks had with Trump, exposing the lies she told Congress during a closed-door hearing last month.

Hicks has been given a deadline of August 15th to appear before Congress and explain the difference in her testimony and what the FBI revealed.

Protecting his former trusted adviser is important to Trump. The less things she says about him, and their relationship, the better. Don't be surprised if she gets in trouble, but Trump comes to the rescue and tries to pardon her.

This is the new America.

We're in the thrall of the most corrupt president America has every seen. Pulitzer prize-winning author, Jon Meachum, recently compared Trump's administration to Andrew Jackson's.

He said they were both tied for the worst president in American history. I disagree. Trump now holds that infamous title by himself.

Interesting fact: Andrew Jackson is Trump's favorite president. The next time you see Trump's fat ass in the Oval Office take a look at the wall behind him... there's a large portrait of Andrew Jackson.

While Trump continues to embrace a strategy to divide America, tell outright lies (even with video evidence contrary to his claims), we are faced with the biggest threat to everything we stand for in our lifetime.

Those that come after us (our children and grandchildren), will be left with the results from whatever actions we take to refute Trump's attempt to make America a facist state.

From now, until election day 2020, Americans need to push back against the rising tide of racism, law-breaking, and hatred that Trump and his minions are sowing every single day.