Stream of Conciousness: If Republicans Are Not Lemmings Then What Are They? 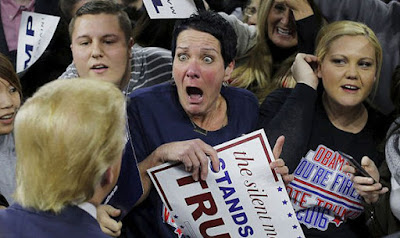 "Listen, before I had my coffee, I didn't know how awesome I was going to be today, either."

I just finished reading a fascinating article on lemmings which has forced me to reconsider my application of the word for Republicans who follow Trump - hell, or high water.

Lemmings DO NOT follow each other off of cliffs. That's right.

It's time for another term for those members of the GOP who drink Trump's Kool Aid without asking what's in it.

I managed to find a Republican who could speak in complete sentences the other day, and I asked him what Trump's followers should be called?

Have you ever been talking with someone who suddenly rolled their eyes until they were pale white orbs? There was a pause, I don't think he was aware of how he looked before he confidently replied, "What was that question again?"

Defining Trump's followers is like trying to catch chickens on meth. In many ways they're indescribable. Some, like the one I interviewed, can speak in complete sentences.

It goes down hill from there.

The sycophants that show up at his rallies grunt in short sentences and have a nasty habit of chanting racial slurs spontaneously (although I strongly suspect there's inside Trumpies who initiate the famous chants like "Send her back!" and "Lock her up!").

How do you compare those rowdy rally attendees to old men and women sitting in their homes counting on Trump to turn back the clock to the 50s after listening to his subtle/subliminal promises?

Coming up with the right term is really a challenge.

I continue to search for an all inclusive term for the types of followers he has, but it's like trying to catch Trump actually telling the truth about something... it's nearly impossible.

So, I turn to you dear reader, and ask for your assistance in solving this grave matter.

Comments urged below this post, or use my email address on the side of the page to share your choice for a proper term for Trumpies.