Rumors of War: A Look at What Triggered Tensions in the Middle East 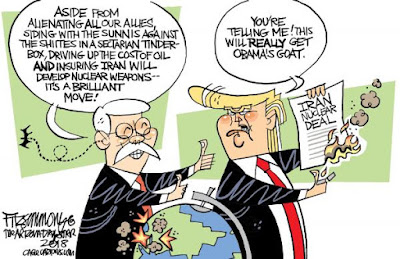 There is NO life before coffee. There is life AFTER coffee!! - Anonymous
Good Day World!

Just so we're all on the same page let's start off with the irrefutable fact that the moment Trump slung into office and tore up America's partnership in a world-brokered nuclear treaty with Iran... things have been getting scarier by the week.

Yesterday, a U.S. Ship shot down an Iranian drone that was threatening the ship's saferty. The USS Boxer waited - and warned the Iranians of immediate action if the drone didn't abort it's mission.

When it got within a thousand yards they destroyed it. The only problem is Iran said they didn't lose a drone and the Americans probably shot down their own drone! Story here.

This was just the latest event in what has become an escalating problem with the Iranian government.

Thus far, no military action has been taken by the US, other than to warn the Iranians to knock the shit off after shooting their drone down.

Also problematic: It's the USA (Trump) against the world, as he's backed out of every major treaty we had with our longtime allies.

We're witnessing the effect of that stupid move now, as the whole region is getting armed and military confrontations are becoming more likely by the day.

One month ago the Pentagon announced it was sending 1,000 additional troops to the area.

Yesterday, the Pentagon announced they are sending 500 more to Prince Sultan Air Base, situated in the desert east of Riyadh, in Saudi Arabia.

Fact: The Trump Administration is continuing its military buildup in the region, which has so far included fighter jets, B-52 bombers, an aircraft carrier strike force, Navy destroyers and - of course - more troops.

Perhaps the biggest irony in this whole mess is that it didn't have to happen. Trump backed out of the nuclear treaty with Iran to spite Obama, and now he's getting the inevitable real world backlash.

Even more ironic, Trump really doesn't want to go to war. Things have gotten out of hand and are escalating, and he's too vain (and outright stupid) to try a re-set.

It would require a compromise of some sort, something the very undiplomatic orange ape doesn't understand, or respect.