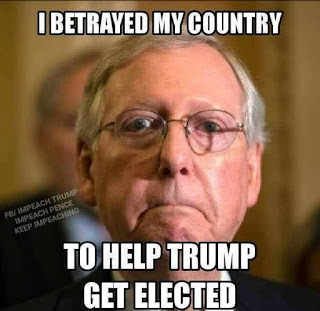 When ex-FBI chief Andrew McCabe told 60 Minutes and other press outlets that Trump was likely a Russian stooge, talk of traitors quickly circled the country.
Again.

The subject has come up numerous times when talking about Trump's cronies actions during the 2016 presidential campaign.

(Editor's Note: This is Part I of a two-part series. In Part II we'll look at other traitors like Mitch McConnell.)
McCabe may be the first lawmaker to publicly come out and say Trump's a traitor.
But what about the people who have been enabling Trump's treason? The one's who have lied for him, and who snuck around Congress leaking classified committee information to him?
Like Rep. Devin Nunes, former chair of the House Intelligence Committee.

He willingly became a mole on the committee and snuck over to the White House in the dead of night to share selected information that could be used to defend Trump.
Even though taken out of context Trump weaponized the information to attack the investigators.

For example, in 2017 Nunes was the subject of an ethics investigation when he held a press conference to announce intelligence agencies incidentally collected information on some of Trump's minions.

It was another pathetic attempt to divert the ongoing investigation into Trump's ties with Russia.

More importantly however, it outed one of Nunes' efforts to obstruct justice. Thus far, he hasn't had to answer to anyone for the illegal leaks, because of his loyalty to Trump - not the USA. But there's a possibility he'll have to answer to Mueller's investigators.

When you look at how many people that are blindly loyal to Trump in Congress, it's a snapshot of corruption at the highest level.

All - and let me repeat this - ALL of Trump's campaign cronies have either been caught lying (or will be) as the numerous investigations into our corrupt POTUS continues to unravel the whole sordid story.

Related: Here's all the indictments and plea deals Mueller has gotten thus far

This ongoing tale of traitors has many twists and turns. In Part II of this post, we'll look into them further.