Sunday Thoughts: Another Crazy Week Ahead 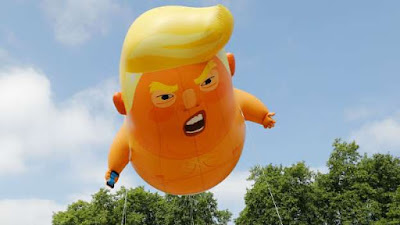 After sipping my cannabis-infused coffee this morning, I tried to digest last weeks news.

But no! My euphoria state of mind took a lazy turn towards the upcoming week in spite of myself. Trying to diagnose a day in the Trump era, let alone a week, is a losing exercise. I know this, but can't help myself...

*(Scene) A mentally-challenged rapper hugging Trump in the Oval Office and ranting on for ten minutes that left everyone watching speechless...even Trump himself!

*Then there was the self-described "Communists" who tried to donate money to a Democrat's campaign. Fail. They were actually GOP activists hoping to get some shit going to derail their opponent.

Things to watch for: How's Trump going to handle the crisis brought on by the Saudis who assassinated a Washington Post reporter? He told 60 Minutes there would be severe punishment for the Saudis, if I turns out there's no doubt they killed a critic of their crown prince.

The interesting part here is Trump's version of a severe punishment. You can bet it doesn't include stopping arm sales with the kingdom. Be ready for a growing rift between Trump and Congress over how to handle the situation.

*Look for more Trump rallies. They're really presidential campaign rallies for 2020 disguised as rallies for Republican candidates running for office.

*You think some of last weeks campaign ads were nasty? You haven't seen anything yet. I predict the GOP's ad campaign will go so low this next week some GOP party members will be shocked.

*Don't be surprised if you see more protests from women activists this week. After Saturday's rally at Grant's Park, Illinois to turn out the vote, I expect similar rallies will take place in the week ahead.

*Crackdown in Georgia - Last week The Associated Press discovered that Georgia has 53,000 applicants in limbo. Over 70 percent were African-American.

Expect some more action this coming week, as Kemp continues to try and game the system.

*Finally I predict dollops of midterm madness throughout the week.

Time for me to walk on down the road...
Posted by ImBlogCrazy at 8:31 AM