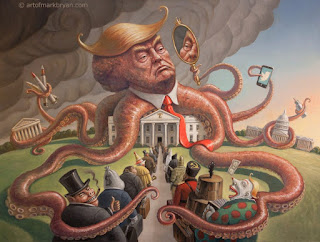 Please be seated as I bring you up to date on the latest episode of The Fall Of The House of Trump, a reality show about corruption.

When we checked in last time Hope Hicks (one of Trump's favorite ass-kissers) broke down in tears explaining to the White House staff why she was suddenly leaving them.

Veteran viewers of the show knew that Hicks didn't really leave to pursue a new career - she left under fire from WH chief-of-staff, John Kelly.

It also might have been something to do with her admission  of "telling white lies," to benefit Trump. Mueller probably took exception to the lying part.

We'll all have to stay tuned on that issue. I suspect we'll hear more down the road.

Here's another heads up moment: Gary Cohn, Trump's top economic advisor, is leaving because Donny won't listen to him about not having trade tariffs that could lead to a trade war.

Meanwhile, we're witnessing a new mini-drama by another Trump kiss-ass of long standing - Kellyanne Conway! She violated the Hatch Act on two occasions.

The US Office of Special Counsel made the announcement yesterday.

So what will be Conway's fate? Will Kelly boot her ass out?

If history is an indicator, nothing will happen to Conway. The results of this investigation will go to Trump to make a decision on.
The counsel's recommendation for a severe penalty will end up in the round files. Trump will praise her. And that, will be that.

You have to admit, it does makes for some good reality TV.

Just look at some of the spinoffs: 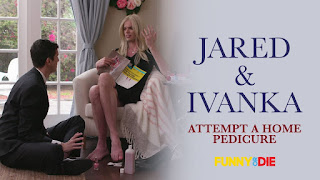 This touching tale also has scenes of Jared being dominated by Ivanka, who forces him to give her a pedicure.

Forbidden Romance, a movie starring Hope Hicks and Rob Porter's short, but adventurous relationship, and how they experienced multiple "Mile-High Club" moments in Air Force One.

Time for me to walk on down the road...
Posted by ImBlogCrazy at 7:18 AM