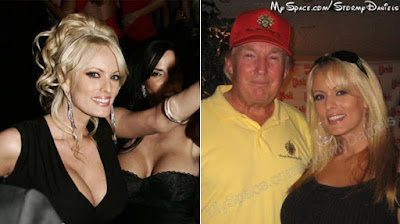 Trumpy and Stormy in better days

My choice of coffee has evolved over the years. I've gone from brand-to-brand, like a suitor looking for a bride.

My latest choice is Don Francisco's medium roast Hawaiian hazelnut. It's simply awesome! I've tried other flavored coffees (have you ever tried Snicker doodle coffee?), but this one tops them all.

Pause...while I take a sip.

Daniels filed a civil lawsuit against Trump Tuesday in an effort to void a nondisclosure agreement between the two. In the suit, she claims that the agreement is not valid because Trump never signed the document.

Trump has claimed she's lying about having an affair with him. I guess we'll just have to see what happens next.

Gov. Jerry Brown got up on the podium yesterday and slammed Sessions for "initiating a reign of terror" against immigrants in California.

"This is basically going to war against the state of California, the engine of the American economy," Brown said. "It's not wise, it's not right and it will not stand."

Sessions on Tuesday filed suit against the state over three new laws, passed last year to protect immigrants living in California illegally, that he argues violate the supremacy clause of the U.S. Constitution and interfere with federal immigration enforcement.

Brown also blasted Sessions for making "wild accusations" and willfully misrepresenting California's laws and its intentions.
"We know the Trump administration is full of liars," Brown said. "They've pled guilty already to the special counsel."
I'll be curious to see how this power move by stumpy Sessions and the snakes backing him turns out.
I'm putting my money on California.