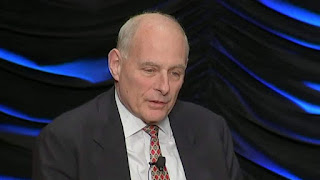 I'm roasting a bowl, and having my favorite roasted coffee this morning.

May yours be as pleasant.

I haven't scanned any headlines yet in search of current topics to opinionate about.

Before you start cheering, that doesn't mean I'm going to start chanting Kumbaya and not opine about something.

He had a light - dare I say it? Kumbaya moment - while being interviewed last week. Basically, he said he missed his old job, and good friends, in the Department of Homeland Security.

You can even say he was full of nostalgia over his old job as Secretary of the agency. At one point he let his guard down - or had a divine vision - and said God was punishing him by making him Trump's #1 whipping boy.

Kelly may be a hypocrite, and liar (both qualifications to work for Trump), but for just a moment he was a sad old man in between a rock-and-a-hard place.

It's hard to explain. I know underneath Kelly, and other dedicated Trumpies façade, there lie human beings who have signed a pact with the orange devil.

As more Trumpies become disillusioned with Trump's tantrums and the chaos in the White House, there should be re-habilitation centers available for treating their addiction to Donny.

I see Trump, and his witless base, as a virus that needs  treated for the safety of the nation.

I also think the Republicans in Congress should be tried for crimes of conspiracy against the country after Trump is locked up for conspiring with Russia in the 2016 election, and Obstruction of Justice.