One Flew Over The White House: How Crazy Is Trump? 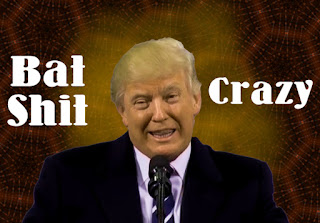 It's another first for The Donald.

He's got people in Congress taking about the 25th Amendment.

You know, the amendment that tells you how to take down a president who is off his rocker.

In an interview, Lee pointed to Trump “going back to conspiracy theories, denying things he has admitted before, his being drawn to violent videos.”

Lee also warned, “We feel that the rush of tweeting is an indication of his falling apart under stress. Trump is going to get worse and will become uncontainable with the pressures of the presidency.”

Catching the State Department entirely off guard, Trump got into another tweet attack with North Korea this week, taunting Kim with a 5th grade playground my-nuclear-button-is-bigger-than-yours bullshit.

Maryland Democratic Rep. Jamie Raskin, has proposed a bill to set up a commission to evaluate the president’s fitness for office.

How far that goes is anyone's guess, but I'd hazard to say it'll fizzle out facing a Republican Congress.

But, you never know.

Trump has got a lot of people worried about his fragile mental state in Washington. A few more taunts against Kim may open a can of worms that calls for some kind of action.