A Case Of Alternate Reality: Trump Attacks The Free Press With Stupid Awards 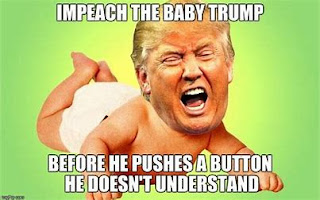 In the real world, we all know Trump is a first class liar and a disruptor of our freedoms.

We also know Trump is a man child with a bad attitude. Look no further than his dangerous game with North Korea. Tweeting about the size of his nuclear button was akin to comparing dick size with Kim.

Trump is all about size. He's constantly defending his tiny hands.

To prove how childish he can be Trump tweeted this Wednesday:

"I will be announcing THE MOST DISHONEST & CORRUPT MEDIA AWARDS OF THE YEAR on Monday at 5:00 o’clock. Subjects will cover Dishonesty & Bad Reporting in various categories from the Fake News Media. Stay tuned!"

Trump has done his best to flip reality and stifle the truth whenever an opportunity has presented itself. Like this stupid awards thing.

It's just a gift to his base for believing his lies.

While Trump's minions laugh and applaud his childish contest, the rest of the country is hunkering down for a nuclear war.

A sitting president is not only denying reality...he's mocking it.