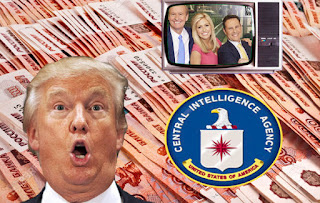 Fox News and our Liar-in-Chief are partners in crime.

They meet every morning.

Afterwards, Donny gets on his golden shitter and starts tweeting.

By the time his advisors show up with the official intelligence briefings they're too late to correct his errors and personal attacks.

The attack in Manhattan by a radicalized Muslim is just another example of the collusion between Fox and their Trump boy.

Instead of tweets of condolences to the eight murdered people's families, Donny turned it into a partisan attack against top Democrat Chuck Schumer for his part in passing immigration laws.

Unlike the shootings in Las Vegas where Trump declined to talk politics right after it, he immediately launched into a political rant after watching Fox and Friends.

When press secretary Sarah (I lie easily) Huckabee Sanders was confronted with what was different between the two shootings, she came up with a word salad that meant exactly nothing.

In summary, she deflected the question and said there was no difference.

It's disheartening to have a president who embraces lies and the vehicles that spawn them like Fox, or Brietbart.

No doubt the producers of Fox and Friends are enjoying this opportunity to guide the president and influence laws. It's a once-in-a-lifetime gig.