Trump Would Like To Get Rid of the Court System - Especially Right Now! 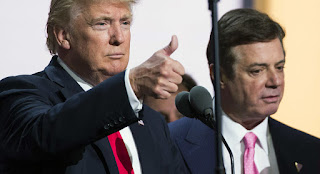 Okay. Let's get down to business and see what the courts are keeping Donny Little Hands from doing recently:

A federal court on Monday blocked the ex-reality star’s ban on transgender service members, preventing the Pentagon from overturning policies initiated by the Obama administration to allow transgender troops from serving openly.

Speaking of courts, Paul Manafort, former Trump campaign manager, is facing a lot of years behind bars. Mueller's team tagged him with a 12 criminal indictments Monday.

The scuttlebutt is Gates may be the "Deep Throat" in the investigation. He's admitted being guilty of working with Russian contacts and is supposedly cooperating with Mueller's bulldogs.

What a soap opera. When Lump is finally convicted of one or more crimes, you can bet someone will make a movie about his attempt at the greatest con of all time.

Maybe, we could get Michael Moore to direct it.