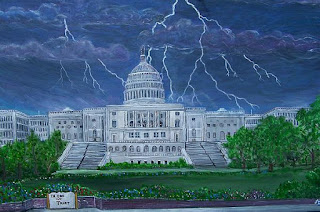 The storm started when Trump was sworn in as our president.

In less than one year there's been so many storms coming from the White House that people are living on the edge. What will the Liar-In-Chief say next?

Politicians and average Americans cringe when Trump starts one his patented tweet storms.

In a gathering of military elites a couple of days ago, Trump hinted at something big happening soon. He coyly told reporters that it was, "The calm before the storm."

Oh shit! That means anything can happen. He was addressing military families gathered in the room. It was obvious that Trump had a plan to shake something up in the world.

It's been time to worry about Trump's actions since his first big lie about the crowd size at his inauguration. When a moron like Trump declares it's "the calm before the storm," it's really time to worry.

He's like a little kid, toying with the press and millions of Americans lives.

After belittling Secretary of State, Rex Tillerson, for pursuing diplomatic solutions to the North Korean crisis, Trump undercut him and said negotiating was useless.

After suffering through too many nasty surprises from Don the Con, Americans are wary. For good reason. His reign has been a waking nightmare, violating laws, ethics, and attacking people of color.

Americans are already weary, and wary, of what Trump will do next. For him to announce that he's got a blockbuster bit of news to share soon, it's going to be "yuge" and terrifying.

It would probably be a good idea to locate the nearest bomb shelter in your city. I'm just saying.

Time for me to walk on down the road...
Posted by ImBlogCrazy at 7:48 AM