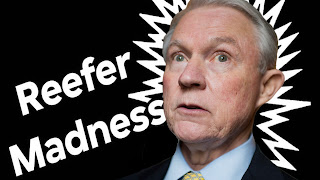 The latest from the Believe it or Not files:

Did you know that there's three marijuana arrests made every minute, day in and day out, in America?

According to FBI figures, pot arrests are on the increase since Trump took office. That's a complete reversal of the last seven years.

Since last November, the arrest total for marijuana offenses tripled. Drug offenses were the single largest category of crimes for which people were arrested, more than burglaries, DUIs or any other criminal offense.

Trump's favorite minion, Jeff Sessions, was given the green light to arrest nearly a million people for substance abuse in 2016, despite the fact that alcohol is considerably more risky and drunk drivers continue to push up insurance rates.

There's no good reason to criminalize marijuana use, which has devastated families across the U.S., particularly in communities of color.

Polls consistently show the majority of Americans are for legalization of marijuana.

Recreational marijuana use is now legal in eight states and the District of Columbia — with a majority of U.S. states offering legal cannabis products to patients for medical use.

Once again, Trump is going against the majority of Americans will, so he can cater to his core base of supporters.

It makes me wonder at what point will a majority of Americans get what they want?

It's apparent Trump has his own hateful agenda that feeds off fear, lies, and racism.

Resurrecting the War on Drugs - which was a complete failure -  reinforces how out-of-touch the Trump regime is with the majority of Americans.