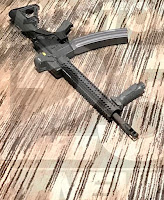 Don't let anyone kid you, hunters don't need silencers, despite a GOP attempt to legalize them to "save a hunter's hearing."

Every time there's a push for some common sense gun control laws, the NRA cracks its whip and the Republicans in Congress cower...like cowards, hiding behind a very wide-open interruption of the 2nd Amendment.

Besides the silencer measure, House GOP leaders had been moving forward with a bill to allow people with concealed-carry permits to take their weapons to other states.

A vote on that measure seems unlikely due to the recent massacre in Las Vegas. The bill will probably be stalled for awhile, but when the controversy settles down it'll pop back up like an evil Jack-In-The-Box.

They claim the Democrats are taking advantage of the situation - a mass murder - by "politicizing it."

So, when is the right time to talk about gun control and safety for Americans? During the Christmas holidays? Easter? Halloween?

I don't think so. When a shooting this horrific - think about it, over 500 people wounded and 59 killed - happens you don't turn your head at one of the root causes.

By brainwashing and bribery, the NRA lobby is holding the majority of Americans hostage. The GOP led Congress is responsible for the spiraling gun murders using semi-auto and automatic weapons.

One example of the NRA's duplicity is a way to make long guns automatic, skirting the American ban on automatic weapons. That's what the Las Vegas shooter did.

The part can be ordered online and easily attached to a semi-auto weapon making it a machine gun. We saw that in Las Vegas.

There's ways to protect the 2nd Amendment without allowing guns of mass destruction to be sold like BB guns. One is common sense.

If Only Stephen Paddock Were a Muslim

"On crushing ISIS, our president and his party are all in. On asking the N.R.A. for even the tiniest moderation, they are AWOL. No matter how many innocents are fatally shot — no matter even that one of their own congressional leaders was critically wounded playing baseball — it’s never time to discuss any serious policy measures to mitigate gun violence."