Trump's Revenge Against Obama and the Middle Class 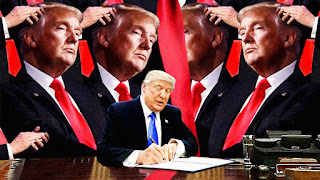 When you have an ego as big as Trump's, the better part of your life is spent getting revenge against anyone who has opposed, or mocked you.

Trump never got over being the butt of jokes by President Obama during a White House dinner. It permanently scared his already sensitive ego which has to be stroked daily by his minions.

Then there's Trump's billionaire buddies. We now see them scattered throughout the administration. They needed a voice in the White House.

They are Trump's peers. He can't identify with the middle class and poor because he's been brought up to believe he's special. A one percenter.

I think it's obvious these two factors are what motivated him to run for president. Just look at what he's done to erase all evidence of the Obama administration.

Despite failing to repeal and replace the Affordable Care Act with a Republican majority in Congress, he's plowed ahead and violated the Constitution again.

By signing an executive order that allows a backdoor attempt at selling private insurance he's sabotaged the Affordable Care Act (ACA), which is the law of the land.

When Trump was sworn in he gave an oath to uphold the Constitution, whose Article Two demands that the president “take care that the laws be faithfully executed.”

When Trump signed his executive order on the ACA it directly collided with the “Take Care” clause in the Oath of Office.

By rolling a grenade into the ACA system he's going to undermine millions of Americans health care.

Instead of helping the majority of Americans get health care by continuing the subsidies to ACA, he's stopping them.

Just like that, in total defiance of the law. Trump desperately wanted some kind of victory because he's been unable to get any serious legislation passed in his 10 months of office.

It's a victory for Donny, and his mindless minions. Not the American people.