Overt Corruption: Kushner Clan Selling 'Golden Visas' To Wealthy Chinese Who Invest In Their Hotels 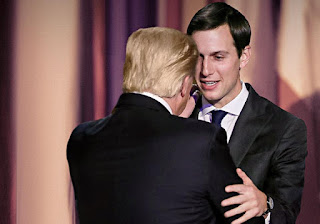 The president's chief advisor - and real president according to some - Jared Kushner, is padding his family's fortunes with White House insider pull.

Trump's family and circle of friends have no shame in their game.

Jared Kushner’s family recently staged events in China to woo wealthy investors into luxury developments, with the prospect of receiving US green cards in return.
On Saturday, Kushner’s sister, Nicole Kushner Meyer, took to the stage at an event at Beijing’s Ritz-Carlton hotel to urge Chinese investors to back One Journal Square, two skyscrapers currently being built in New Jersey.
“Invest $500,000 and immigrate to the United States,” the event’s brochure claimed, according to the Washington Post, which first reported the story.
As usual, when it comes to Trump and his family, there's numerous conflicts of interest involved. It doesn't seem to bother Jared or Chump, because they are plowing ahead with impunity.
The presidency has been reduced to promoting brands and influences for the Trumps and the Kushner's. It's Donny's biggest con and 1% of the nation is cashing in.
Noah Bookbinder, the head of Citizens for Responsibility and Ethics in Washington, told the New York Times the sales offensive was “highly problematic” and could be interpreted as selling access to Jared Kushner.
Duh! No kidding.
Here's the part that worries me; no matter how many times the White House is caught promoting the Trump (or Kushner) brand, they weasel out of trouble.
The White House website was recently used to promote Lump's Mar-Lago mansion. This brazen self-promotion was taken down after a couple of days when numerous accusations of unethical behavior popped up in the press.
By now, anyone with a lick of sense knows Dump is not going to release his taxes because they'll reveal his shadowy business dealing with Russia and China (America's two biggest enemies).
Kusher and Hump, both real estate magnets, now have access to more money than even their greedy hearts thought possible.
We can expect these two family dynasties to take full advantage of their positions in the White House for Rump's term.
That's because the Republican dominated House and Senate are afraid of them. The chance of getting a negative tweet from Donny Little Hands is enough for those stalwarts of the people to cringe and hide.
Time for me to walk on down the road...
at May 09, 2017