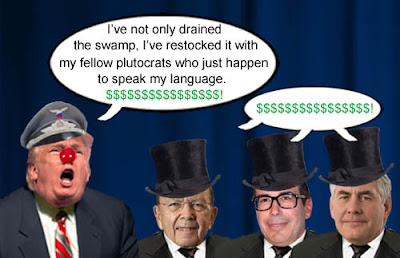 Trump era maxim; "Run the country like a business, and don't sweat the small shit like human rights and freedom issues."

Our new Secretary of State, Rex Tillerson, who was ExxonMobiles CEO prior to his appointment from Chump, gave a short speech to his disgruntled staff explaining his new foreign policy approach the other day.

Former US state department officials were blown away when they heard the direction Tillerson was steering the ship of state.

“This is the most clueless speech given by a secretary of state in my lifetime,” said Tom Malinowski, former assistant secretary of state for democracy, human rights, and labour.
“Clueless of what came before him, and of how US foreign policy has changed in the post-cold war era; clueless about what the world expects of America, including that we defend universal values and norms; clueless about what the people he is supposed to lead actually do and the harm being done to their mission and morale by his cluelessness.
“The speech was like being told the amputation of your limbs will be good for you by a surgeon who skipped medical school,” Malinowski added.
There's a reason why Rump picked Tillerson. He, like the rest of Rump's nominees, believes running the country like a business is more important than American values, ethics, and morality.
I'm waiting for Lump to come up with a new way to address our country. Something like, "The U.S. Corporation of America."
Time for me to walk on down the road...
at May 07, 2017