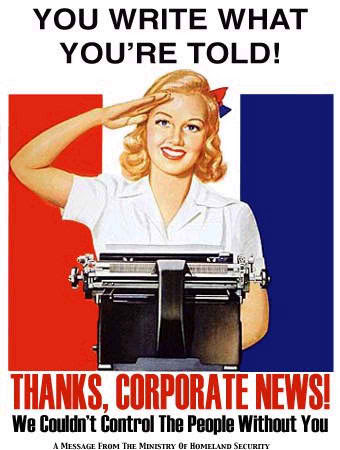 Americans are sick of the corporate masters that rule them.

Skepticism of corporate power is what the American Revolution - or at least the event that sparked it - was all about, which makes the latest polling about money in politics anything but surprising.

According to Bloomberg Politics, a full 78 percent of Americans think we should overturn the Supreme Court's 2010 Citizens United decision that opened up our election process to floods of corporate money. This isn't, by the way, a situation where a bunch of Democrats are tipping the scales.

Money in politics often gets painted in the media as "liberal" or "progressive" issue, but this new Bloomberg poll shows that Americans of all political persuasions overwhelmingly oppose Citizens United.

Eighty-three percent of Democrats want to overturn it, as do 80 percent of Republicans and 71 percent of self-declared independents.

The ever-more-concentrated corporate media really don't want to discuss Citizens United or the public's overwhelming desire to overturn it. In fact, even though our TV networks have spent hours breaking down every single Donald Trump poll, they've so far completely ignored that amazing Bloomberg study on opposition to Citizens United. And I mean completely ignored.

Maybe there's a good justifiable, journalistic reason for this. Maybe the fact that Americans hate Citizens United is so obvious that the mainstream media don't think it was worth reporting on.

The big open secret about Citizens United is that the mainstream corporate media support it. More money in politics means more money spent on elections ads, which, of course, means more money for the corporations that run the major news networks.

But luckily, the American people are figuring out what's up. If the rise of Bernie Sanders is any indication, they're more than ready to take part in another political revolution against corporate power - just like the one that founded this country 239 years ago. (read the full version here)