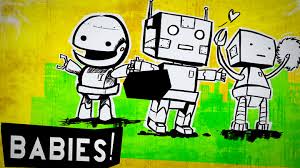 I Robot is a reality.

The movie “I Robot” came to mind when I read about what researchers were doing with artificial evolution experiments recently.

More on that shortly.

One of my favorite robot movies harkens back to the silent film era. If you have a few minutes watch…

In the future city of Metropolis, people are divided into exalted thinkers and downtrodden workers, and a robot disguised as a woman causes sexually charged mischief. Fritz Lang's masterpiece (1927) was the most expensive silent movie ever made.

BACK TO THE FUTURE

Researchers have demonstrated a sort of rudimentary artificial evolution: a robot that creates generations of smaller "baby" robots, evaluates them and selects the best to "live" on — just like Mother Nature.

Check this video out

“The study was led by Fumiya Iida at the University of Cambridge.

A "mother robot" assembled smaller robots by gluing together pieces, some of which were equipped with motors, in various configurations.

It then observed how quickly the resulting "children" could move, and then kept the designs of the fastest ones and disassembled the rest.

It then included this information when creating a new "generation" — either mutating the successful designs or integrating them into less successful ones.” (Source)