GOP relying on scare tactics rather than compelling arguments

Editor’s Note: Every now and then I like to run guest op-eds. Today’s candidate writes for the Cavalier Daily

As traditional arguments for voting Republican — like believing it will bring about limited, efficient and pragmatic government — have collapsed, the GOP has relied on a politics of fear to win elections amidst low turnout and an increasingly apathetic public.

In 2016, the politics of fear will fall short of the historic nature of Hillary Clinton’s inevitable candidacy. The potential for the first female president and her impeccable qualifications — Secretary of State, a senator and First Lady — mean that the eventual Republican candidate will have to adopt a more positive, moderate form of messaging. In order to chart a compelling path for the GOP to the White House, it is first necessary, however, to deconstruct how the politics of fear manifests itself and how it fails.

Congressional Republicans have been desperately trying to prove they can govern as well as obstruct, though their recent actions have done little to change their perception.

Republicans’ rabid opposition to President Barack Obama’s recent executive action on immigration has led to their latest exercise in brinkmanship: failing to fund the Department of Homeland Security while at the same time bemoaning the national security threats of ISIL and terrorist plots in Europe.

This is an exemplar of how GOP politics are guided by fear and xenophobia. The aging, white conservative base, to which “executive amnesty” is anathema, reflexively oppose comprehensive immigration reform — in spite of its widely documented potential to grow the economy — because of their fear of those that are different from them.

Predictably his predictions of “crippling unemployment” and “another recession” have proved at best delusional or at worst knowingly demagogic as unemployment has plummeted to 5.6 percent, gas prices have fallen and home values have surged.

Even attempts to define the GOP as the party of limited, fiscally responsible government seem in vain. The myth that Republicans will bring about lower taxes for all has pervaded for decades but cannot long defy political realities across the nation. 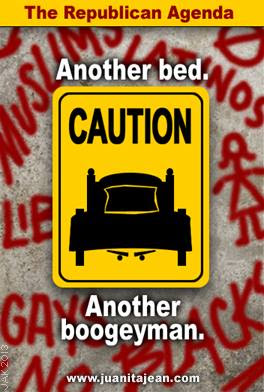 Kansas Gov. Sam Brownback’s tax cuts, which were heralded by conservatives everywhere, have resulted in fiscal turmoil and likely deep cuts to state education. Furthermore, a Center on Budget and Policy Priorities study showed “Most of the benefits went to high-income households” and “Kansas even raised taxes for low-income families to offset a portion of the revenue loss.”

This exposes how Republicans’ rhetoric of lower taxes for all actually translates to benefits for special interests, corporations and the wealthy but even greater tax burdens on the working and middle classes. (read the rest here)