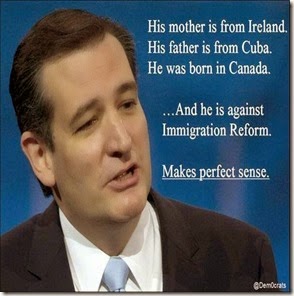 “Famously anti-Obamacare Texas Sen. Ted Cruz is now signing up for health insurance on an Obamacare exchange, he confirmed Today.

“We will presumably go on the exchange and sign up for health care and we’re in the process of transitioning over to do that,” Cruz told the Des Moines Register.

Cruz, a vociferous opponent of Obamacare, led a filibuster against funding the health care law in 2013.”

How’s that for some raw meat Birthers and Conservatives everywhere?

Where have all the birthers gone?

Some Canadian-born rascal is running for president. Sen. Ted Cruz (R-TX) has announced he’s running for the presidency.

I just hope you “Birthers” are up to this challenge. You deviled Barrack Obama throughout his presidency, so I know you have the stubborn stamina it takes.

Cruz is best known for his role in shutting down the federal government in October 2013, when he devised and executed a strategy of blocking any spending bill that included funds that would be used toward implementing the president’s health care law.

He talked House and Senate conservatives into keeping the government shuttered for more than two weeks. That stupid move cost the economy billions of dollars, according to the Office of Management of Budget, and angered fellow Republicans who saw no endgame in the strategy other than a dip in the party’s approval rating.

Meanwhile, the media is hardly talking about Cruz’s foreign birthplace and the fact that a US president must be a “natural born citizen.”

So, it’s up to you dedicated “Birthers” to take up your torches and light up Cruz’s life for as long as he’s in public office.

Obama is old news. Cruz is trying to pull a fast one, and it’s up to you guys to call him on it!