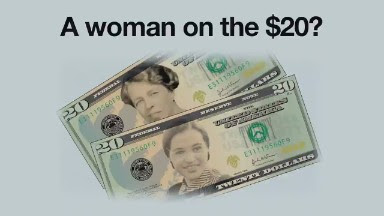 There’s a lot of talk going around nowadays about putting a woman on our $20 bill, currently occupied by Andrew Jackson.

The list of candidates at womenon20s.org will be winnowed down to four finalists. Then, the campaign will put together a petition in hopes of catching the attention of President Obama. If 100,000 people sign, the White House will have to respond.

"It's a small symbol, but there are millions of bills that are going from hand to hand every day," said campaign founder Barbara Ortiz Howard. She hopes to put a woman's portrait on the $20 by 2020 to celebrate the 100th anniversary of women's right to vote.

But what about tradition? We’ve always had presidents on our currency.

Now, because it’s viewed as politically correct, photos of women from housewives to politicians, are being considered.

It seems to me we’re losing too many traditions in this country.

Pretty soon we’ll start putting rock stars on 50-dollar bills. Sports figures will peek out at us from the $100 bill, and obscure politicians will be on the one-dollar bills. Five dollar bills will have photos of cartoon characters (from Porky Pig to Daffy Duck).

Of course, my humble opinion means nothing in this PC world we live in. But, I do have a solution that should be acceptable to both sides of the issue;

It’s simple; as soon as we get a woman president, we can place her face on the $20 bill.