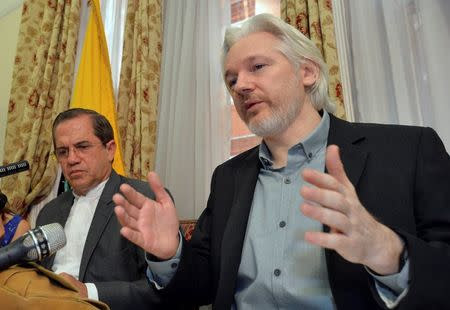 The 43-year-old Australian has been stuck there since June 2012 to avoid a British extradition to Sweden, which wants to question him on allegations of sexual assault and rape.

A Swedish court rejected on Thursday an appeal by Assange to revoke a detention order issued over allegations of sexual assault.

"There is no reason to set aside the detention solely because Julian Assange is in an embassy and the detention order cannot be enforced at present for that reason," the Svea Court of Appeal said in a statement.

Assange denies the allegations and says he fears Sweden would extradite him to the United States, where he could be put on trial for one of the largest classified information leaks in U.S. history.

How this standoff will turn out is anyone’s guess.

The only question I have is, “After two years, does Assange speak Ecuadorian?”

Seems like a good language to learn if he’s going to live in that embassy the rest of his life to avoid being tried for rape.