‘Republicans are People, Too’: A Pathetic Whine from The Right

Gosh…I’m starting to feel bad for the Republican Party.

They’ve been branded by the public as a bunch of inept bunglers who dislike women and minorities and can’t seem to shake the image.

The last time the GOP looked this bad in the polls was 1974. Remember Watergate and President Nixon? That bad. So, what can turn this negative into a positive?

A Republican adman unveiled a new public relations campaign to soften the image of the Grand Old Party using the guiding slogan “Republicans Are People, Too.”

The promotional push came complete with a highly produced video, a website and social media efforts.

Republicans can thank Vinny Minchillo – last seen working as Mitt Romney nasty ads producer in 2012 – for this idea. Never mind the fact that Romney was whipped in the election.

“let people know that it’s OK to be a Republican,” in a world in which he feels it has become “socially acceptable to say bad things about Republicans.”

I think I’m going to cry.

That slogan, however, harkens back to another dark time for the GOP image.

In 1974, when the heavily damaged GOP brand was reeling from the Watergate scandal that brought down Richard Nixon, the Republican National Committee launched its own “Republicans Are People Too” initiative in an attempt to recast the party before a skeptical public.

Here’s how Craig Shirley, a longtime political consultant and Ronald Reagan biographer, put it in his book Reagan's Revolution: 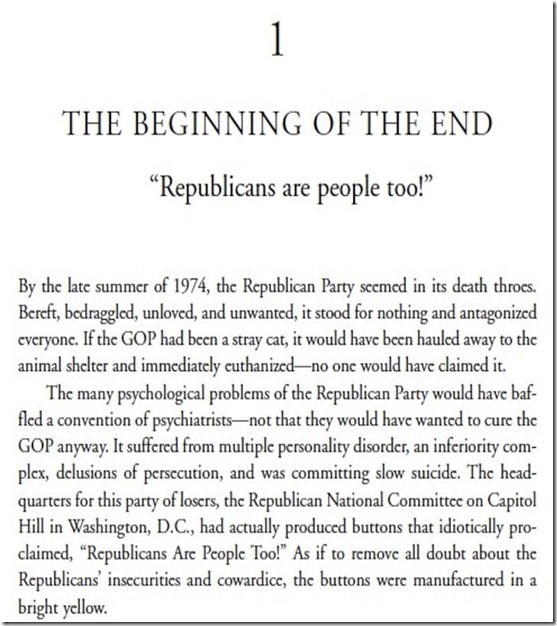 This effort is a sad attempt at getting respect. If you have to go around and remind people that your human(!), something is basically wrong with your message. Your team is riding on the crazy train.

The Republican effort to give corporations the same rights as people has not endeared them to the masses.

Instead of wasting time trying to get some pity votes, Republicans should be actively working on positive projects that will benefit the American people.