A basketball legend in my own mind – and that’s fine 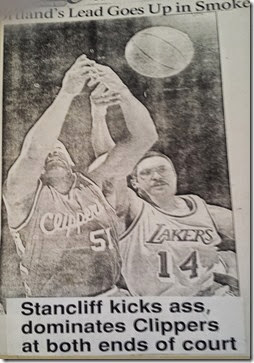 The older we get the more daring we perceive our past deeds to have been.

Memories, blurred by the passage of time, take on heroic proportions when recalling our younger days. People, like myself in their mid 60s and older, like to recall past glories sometimes.

I passed on playing for the high school team because I knew my grades weren’t good enough – and besides…I learned more on those outdoor courts than the scholars did playing their organized ball games in gyms with wooden floors.

Over the years I played pickup games across the country, stopping at schoolyards with my buddy, and challenging the locals to two-on-two. Sometimes it was full court and we made sure to be on the same team.

I played for the 101st MPs when I was in the Army and stationed at Ft. McArthur. I didn’t start because the other two guys playing guard were better than I was. At 6’2, I was small, even for a guard.

Later, I played in a city league while working for Ford Motor Company in Cleveland, Ohio. I was the only white guy on the team and the shortest. I earned the right to start, and played point guard. We won the city league title that year. It was probably the high point of my basketball glory days.

I kept playing pickup games after getting married and having three children – all boys. I made sure to teach them the game and other sports. We would play 3 on 1 at an outside basketball court located at the nearby high school.

The decades slipped by, and the stories I told my boys about my basketball power’s were often embellished. In short, I became a legend in my own mind (see top left photo).

I wonder how often that happens to people?

These days my back and knees are shot. I walk slowly. Running and jumping are becoming memories. But you should hear some of the great stories I have about playing hoops and lessons in life learned on the basketball court.

Perhaps someday, I’ll write about them.