Waiting for Justice: Will another angry white man get away with killing a black teenager? 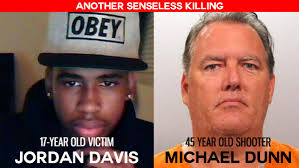 In some ways the mainstream media has downplayed the case of Michael Dunn, the man who senselessly murdered a teenager because he didn’t like his “Thug music.”

The similarities between this trial and the Travyon Martin/George Zimmerman trial are apparent. Florida’s Stand Your Ground Law has turned the state into a shooting gallery where whites shoot blacks and get away with it, claiming they felt threatened.

Some legal experts say Dunn will not be able to successfully invoke the Stand Your Ground Law defense, but his lawyer sure is trying. If Dunn gets off on some technicality there’s going to be open warfare in Florida. The sanctioned killing has to stop.

The latest news story on the trial…

“Jurors resumed deliberations Thursday in the trial of a white Florida man who shot and killed a black teenager after an argument over loud rap music.

Michael Dunn, 47, a software engineer, claims he acted in self-defense when he fired ten rounds at an SUV with four teens inside while parked at a Jacksonville, Fla., gas station. His shots killed Jordan Davis, 17, of Marietta, Ga.

Dunn is charged with first-degree murder and three counts of attempted murder for the November 2012 shooting. His case, which has attracted international attention, has been compared to that of George Zimerman, the neighborhood watch volunteer acquitted in the death of unarmed black teenager Trayvon Martin.

But experts say the defense team in Dunn's case faces a much bigger uphill battle than Zimmerman's attorneys did.” Whole story here