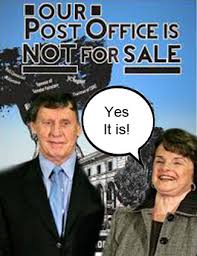 Today we’re going to look at a case of corruption involving Senator Diane Feinstein and her husband Richard Blum.

Here’s the backstory: the US entered into a contract with a private firm to sell 56 buildings that currently house U.S. Post Offices. The estimated amount from the sales is $19 billion.

The way the deal is set up a regular real estate commission will be given to a private company that’s handling the sales. The company’s name is CRI, and it’s owned by none other than Feinstein’s husband, Richard Blum.

The thing is most voters and the government people who approved the deal did not make the connection between Feinstein and Blum. The upshot of this underhanded deal is Feinstein and Blum stand to make between $950 million to $1.1 billion dollars!

What really irritates me is all those properties were paid for with tax payer money. To add to this stinking scenario the money – minus real estate commissions – is going to the U.S.P.S  an organization so poorly managed that it lost $117 billion dollars in 10 years.

My question is why hasn’t the mainstream media picked this up? How does a U.S. Senator get away with organizing such a sweet deal under the public radar? Have we become so elitist that there’s no longer any fear of government oversight?

It’s no coincidence that these two public crooks have different last names; It’s merely a feeble attempt at avoiding transparency in these kinds of transactions.

This information has been verified at http://www.snopes.com/politics/business/blum.asp

and, at TruthofFiction.com. Use it as you see fit.