Please tell me how leaking classified information to terrorists makes someone a hero?

I’m still trying to understand why Edward Snowden is being treated like a hero by so many people. As his well-wishes gush about freedom and whistleblowers, American’s enemies think they’ve died and gone to heaven!

The world’s terrorist community, led by al Qaeda, have been dancing for joy since Snowden skipped off with classified NSA records. The fact that he’s caused the US so much trouble with its allies alone is enough to make any enemy of America gleeful.

Still trying to gauge how many American spies have been put at risk. Snowden leaks stuff out a bit at a time, probably at the insistence of his new master Putin (now there’s a nice guy). If you think Putin is letting Snowden stay in Russia for nothing in return you still believe in Santa Claus and the Easter Bunny! 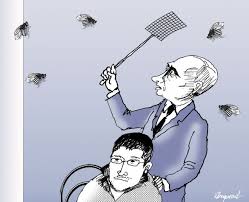 Snowden may be a hero to people who hate America, but I think he’s a confused punk who got in over his head! What good is coming out of his revelations?

How have they helped Americans? Snowden isn’t the first one to suspect the NSA and other agencies were wiretapping a lot more than they admitted.

Face it, every country in the whole world is spying on each other. It’s the 21st century for cripes sake! Cameras are everywhere. Because some uninformed people think Snowden is out to protect the little guys rights, he’s being described as a martyr who’s protecting the US Constitution.

What baloney! He broke his contract, stole sensitive materials, and took off like a thief in the night; hopping from country-to-country until Putin took him into his benevolent arms! A hero? I think not.

You and I will never know the true amount of damage Edward Snowden’s done to America’s security and intelligence community because no one is going to broadcast that information.

Our friend Great Britain has also suffered from information leaked by their journalist of note, Glenn Greenwald, who has become Snowden’s conduit to publication.