Pets still dying from jerky treats: experts call it a mystery, I call bull sh*t on the experts! 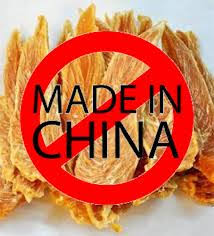 After six years, the FDA has still failed to ban chicken jerky treats from China even though they continue to kill American pets. I’m tired of the excuses being offered. What I want to know is who is benefiting from selling these deadly jerky treats?

Then I want to know why the FDA can’t see what thousands of pet owners and veterinarians nationwide have been seeing: over 600 animals dead, 3,600 sickened from the latest outbreak according to this FDA update.

Five years of testing. Nothing.

FDA officials and veterinary experts who’ve been tracking the problem say it’s just not that easy. The FDA can’t force product recalls without a reason, said Martine Hartogensis, a deputy director at the FDA’s Center for Veterinary Medicine. And so far, the FDA and a network of veterinary labs have failed to find a specific problem.

“To date, testing for contaminants in jerky treats has not revealed a cause for the illnesses,” Hartogensis told NBC News.

It’s not for lack of trying, said Lisa Murphy, an assistant professor of toxicology at the University of Pennsylvania’s School of Veterinary Medicine, one of nearly a dozen labs nationwide assisting the FDA. Since 2007, but especially in the past two years, the Veterinary Laboratory Investigation and Response Network, Vet-LIRN, has been riveted on the issue, she said.

“It’s extremely frustrating for everybody involved,” Murphy said. “A lot of really smart people with a lot of expertise are looking at this. I can tell you a lot of things that this is probably not, but to the general public, that’s not a very satisfying answer.”

Meanwhile, we continue to allow these toxic treats to be sold. Where’s the accountability? How many more pets must die before someone puts a stop to this?

The FDA had the chance to ban jerky pet treats from the U.S. market last year, when officials at five Chinese plants that make jerky treats wouldn’t let American inspectors collect samples of the products. U.S. regulations allow the agency to refuse entry to products if they’re not allowed to inspect them.

Time for me to walk on down the street…