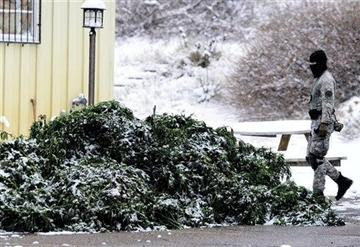 Claiming that certain guidelines weren’t in place, the Feds descended upon Colorado pot dispensaries in a show of force.

Pot advocates are really hoping the Feds aren’t sending a message in advance of January 1st, 2014, when it’ll be legal to dispense marijuana and cannabis products in the state.

Federal agents raided an unknown number of marijuana dispensaries and growing sites on Thursday in Colorado, confiscating piles of marijuana plants and cartons of cannabis-infused drinks just weeks before the state allows sellers of recreational marijuana to open their doors.

The action appeared to send a message that federal authorities would be keeping a close watch on the industry as a state law legalizing pot is implemented.

The raids, conducted on a frigid, snowy morning, were the first in Colorado since the U.S. Department of Justice said in August that it wouldn't interfere with state marijuana laws as long as the drug is kept away from children, the black market and other states, among other guidelines.

In a statement, the U.S. Attorney's Office in Denver said the criminal investigations unit of the Internal Revenue Service, the federal Drug Enforcement Administration and Denver authorities were involved in executing the sealed search and seizure warrants.

The raided businesses were suspected of violating more than one of the eight guidelines issued by the Justice Department.Retail marijuana sales are set to begin on Jan. 1 in Colorado, though not all municipalities will be ready to regulate sales by then. For now, dispensaries are supposed to sell only to people with medical permission to use the drug. Many of the state's 500 or so existing dispensaries are making plans to convert to recreational sales.

People involved in Colorado's marijuana industry were quick to point out that the raids did not necessarily mean the federal government was going back on its word or planning to interfere with Colorado's recreational pot market.

Mike Elliott, a spokesman for the Medical Marijuana Industry Group, said the industry itself has pushed for robust regulations and expects compliance with lengthy state regulations on how the drug and be grown and sold.” full story here