Still simmering over how the Tea Party almost shut down the government. What they did was seditious and non-American. Yet they act like they’re the true Americans. I’ve never seen a more hypocritical group of loons in my life!

You know how Tea Party members talk about being a “grass roots” organization? That, my friend is pure unaltered bullshit! They’re financed by two of the most extreme conservative billionaires in America today…the Koch brothers.

The following article is for those who drink the Tea Party Kool aid and are dumb enough to believe they’re just this little organization full of Andy of Mayberry-types rising up against the tyranny of Obamacare!

“Extremist Tea Party reactionaries in the Congress led our nation to the very brink, passing a deal hours before midnight on October 16.

As the very real threat of a catastrophic debt default loomed this week, the Koch Brothers were running for cover. Koch Industries sent a letter to Congress saying the corporation controlled by two of the richest billionaires in the world was not responsible for the shutdown.

David Koch's Americans for Prosperity group helpfully clarified that it did not support the strategy to defund the Affordable Care Act (ACA), it just wanted to repeal it.

It’s time for a fact check. The Koch family foundations and the newest known Koch vehicle -- Freedom Partners, which is staffed with by operatives connected to the Kochs and housed in the same building as Charles Koch’s foundation -- have bankrolled practically every group working to create a fake grassroots uprising against the ACA. Many of the groups linked to the Kochs have also pushed an extreme “shut-it-down” position that led the U.S. to the brink of a historic government debt default. 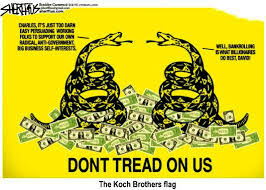 Here is a field guide to some of the Koch O’ Nuts and what is known about their funding.

Freedom Partners funding in 2012: $31,600,000. Plus an additional $4,278,000 from Center to Protect Patient Rights in 2011. The total amount of funding from David Koch himself directly to AFP versus filtered through Freedom Partners is not disclosed.

AFP was founded by David Koch in 2004, when Koch’s “Citizens for a Sound Economy” split into FreedomWorks and AFP. Known funders in the past include Koch family foundations, the Scaife Foundation and the Bradley Foundation. Today it is one of the largest beneficiaries of a previously unknown stream of money from Freedom Partners

According to AFP: “Americans for Prosperity has led the charge against Obamacare implementation throughout the summer, with events around the country and millions spent in television and radio ads.” The New York Times reports that AFP has run $5.5 million in television advertising against the law over the past three months.

According to USA Today (September 19, 2013): “Between July 1 and Sept. 16, Americans for Prosperity led all advertising [on the subject of ACA, either for or opposed], running more than 3,200 spots to slam the law, according to a tally of advertising by Kantar Media.”

Controversial Texas Senator Ted Cruz, who spearheaded the effort to shutdown the government over the ACA, was featured at AFP’s national “Right Online” conference last month, where he advocated the repeal of the ACA through defunding it and tying that defunding to the budget fights.

The Executive Director of AFP, Tim Phillips, praised Jim DeMint for his efforts at the Heritage Foundation to "do what’s right" (Heritage Action, as noted below, was a primary advocate of the shutdown). He also praised Cruz, his featured speaker, for sticking to the agenda of "we're going to do what’s right from day one," like DeMint, plainly referencing their fight against the ACA. 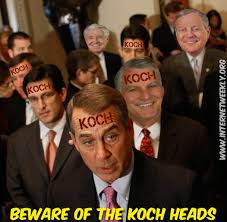 Freedom Partners funding in 2012: $500,000. Total amount of direct funding from the Koch family fortune is not known.

Heritage Action has pushed the extremes in its effort to defund Obamacare at any cost with weekly Action Alerts demanding that their supporters call Congress and reject any deal that did not defund Obamacare. On the night before the government default deadline the group continued to urge no deal the "proposed deal will do nothing to stop Obamacare’s massive new entitlements from taking root -- radically changing the nature of American health care" and told Congressional leaders their votes would be scored.

"Heritage Action was also responsible for running internet ads against 100 Republican politicians who failed to sign a letter to House Speaker John Boehner encouraging him to defund Obamacare at any cost,” reports the Business Spectator. 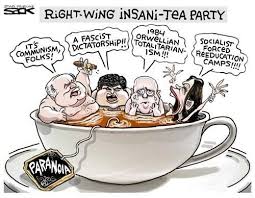 On the brink of default on October 16, the Tea Party Patriots were urging no deal. "The Ruling Elites in Washington, D.C. have completely abandoned the American people," said Martin. "The deal cut in the Senate does NOT protect the American people from this unfair and unworkable law."

via Truthout  read the rest of the story here

Posted by ImBlogCrazy at 6:37 AM