Blast from The Past: Three Animals Steal Bicycle 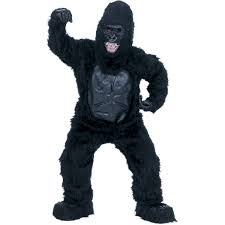 It’s time for a quick glance back in the “As It Stands” archives to October 2010 for an unusual Halloween-related event:

“I guess the Halloween pranks are coming early to one little town in Suffolk County. I know it’s not funny, but the idea of three costumed thugs stealing a person’s bike while th

ey’re on it is kinda bizarre. Don’t you think?

Can you envision the person in the chicken suit barreling down the road on the purloined bicycle? Didn’t this person think anyone would notice the

costume? Or, is it possible that was the whole point? Punks will be punks at any time of the year.”

Suffolk County police say two people in gorilla costumes and a third in a chicken suit took the boy's bike Monday in Rocky Point, on the north shore of Long Island.

Police say the three confronted him while he was riding along Route 25A around 1:15 p.m. Police say one of the gorilla-suit suspects punched the teen in the head and knocked him off his bike, and the person in a chicken costume rode off on it. The ape-suit duo ran away.

The teen was treated at a hospital for minor injuries. He's been released. Detectives are searching for the suspects.