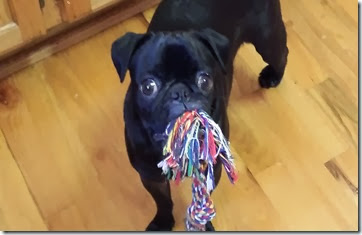 My pug Molly (left) is 16 months old and likes to eat rocks (pea-sized pebbles)! I’ve heard the term “rock hound” before, but this gives it new meaning!

My wife and I were concerned when we first noticed her new trick of eating pebbles when we moved to our new house in Medford, Oregon.

The pebbles were coming out in her feces so we weren’t too worried at first. But the more we read up on why dogs eat rocks, the more we started too worry. We “Googled” her behavior and discovered she might have a vitamin deficiency. We also found out it was a way of getting attention if she didn’t feel like we were playing with her enough! (See above photo).

After talking with her veterinarian who explained that if she keeps up with this behavior after we take preventive measures, she might have an underlying disorder such as anemia, exocrine pancreatic insufficiency or a portosystemic shunt that may be causing her compulsive rock eating.

Three days ago she throw up a rock and became steadily sicker until my wife and I became concerned and took her to an emergency animal hospital (her regular doctor isn’t open on weekends). They ran tests, took an x-ray, gave her an IV drip (she was getting dehydrated from constant vomiting) and kept her overnight.

When we picked her up she was weak and lethargic. We were told that the x-ray wasn’t very clear – there was a lot of gas and fluids that made it hard to see if there was a blockage in her intestines. So we’re taking her in today to her regular doctor for another x-ray, and possibly another panel of tests. Thank goodness Parvo was ruled out!

The bottom line is we still don’t know why she got so ill. It’s possible she could have eaten a small onion as we have a vegetable garden in the backyard. I got rid of those fast when I discovered they were toxic to dogs! Who knew!

Meanwhile, I have a much more extreme example to share with you about a lucky dog who got away with eating a whole package of frozen onion rings and lived to tell the tale (pun intended). 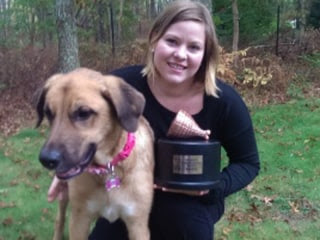 Winnie, a mixed-breed dog from Mass., ate two pounds of frozen onion rings while her family was out. When they returned, they found both the empty bag and a very guilty-looking dog.

Had Winnie known better, a look of worry might’ve also crossed her face. Onions are toxic for dogs, and once the family realized it they rushed her to the vet.

Winnie made a full recovery, and this week also got something a little extra for making it through her trauma — a special bronze trophy in the shape of a ham bone.

The Hambone Award is given annually by VPI Pet Insurance as a way to educate pet owners about unexpected mishaps that befall household pets. (Past winners include Peanut, a dachshund-terrier who was buried alive by a skunk.) Full story here