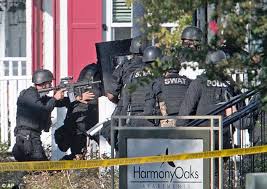 I’ve read and heard many stories about police killing elderly people in shootouts. Happens all the time in our gun-loving culture. Despite that, I came across a story that should never have happened.

The reason I’m sharing it with you is because I have an opinion about the story, which I’ll give after you check it out.

The 80-year-old Arkansas woman who called the police on her 107-year-old roommate says officers had no choice but to shoot and kill him. Pauline Lewis told Little Rock station THV 11 Monday that she invited Monroe Isadore to move in with her last month — but he went ballistic when she suggested he find a new apartment on Saturday night.

A SWAT team pumped tear gas into the room and he started firing at them through a window, police said. They fired back and he was killed. The incident is under investigation, but Lewis said police were not out of line. Full story here

The hell they weren’t! You can’t tell me that the SWAT team wasn’t out-of-line this time! They could easily outwaited the old guy – for cripes sake he was 107 years-old and would have fallen asleep eventually!

But no. Like a group of Rambo robots, they had to create a situation by pumping tear gas into the room he was barricaded in. What did they suppose he’d do? He panicked and fired his gun. Even then however, they could have backed off a safe distance and attempted to negotiate with him. If that didn’t work they had other options.

Common sense would tell anyone that a 107 year-old man is not going to charge out of a barricaded room and threaten anyone. By prodding Monroe Isadore with the tear gas attack the SWAT team showed an appalling lack of common sense.