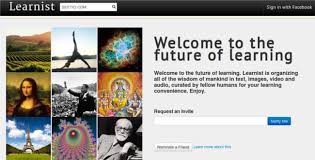 My wife was really pleased with the brand new Android app for Learnist that she downloaded today.

She said it had great graphics!  It’s available to everyone at Goggle apps. As a consultant for Learnist, I’m thrilled to see that my boards are going out to a wider audience now!

It was a big leap when Learnist came up with it’s first IPAD app. Now, with the launch of this new Android app Learnist is reaching out to the rest of the world…

When Grockit first emerged back in 2008, it had set its sights on building a full-service, social learning service that would give students a better way to study for standardized tests, among other things. It enabled students to study solo or in groups by connecting with live instructors or perusing its library of video content.

Yet, five years later, Grockit found itself in survival mode, never quite finding the explosive adoption that could justify the $25 million in capital had raised over the years from big-name investors like Mark Pincus and Reid Hoffman. Last year, the team began to experiment with new tools, chief of which was Learnist, a digital clipboard that was later dubbed its “Pinterest for education.”

Over the next six months, Learnist took off and, eager to ride the wave, Grockit put all of its efforts behind the new product, selling off the Grockit name, test prep business, technology and platform to Kaplan in July.

Today, as it looks to expand its international reach and support the fastest-growing mobile platform, the team is bringing its learning network to Android. With the launch of its new Android app, users will be able to find multimedia learning experiences and expert knowledge in areas that interest them, collaborate with like-minded learners, and connect and share content across social networks.

Backed by a fresh $20 million from Discovery, Summit, Atlas, Benchmark and others, Learnist is eager to ride the growing adoption of mobile learning tools both in and outside of the classroom and bring its network to a wider audience.

Learnist was initially developed for K-12 teachers and students, allowing users to create “learn boards” for everything from reading assignments to Common Core-supported Math lessons, but the founders have since expanded that scope in an effort to attract a wider set of life-long and casual learners. In much the same vein as Coursera, Learnist is looking to create a network that applies to both formal and continuing education and can be used alongside classroom tools like Schoology and Edmodo to create a more holistic classroom learning experience, for example, while giving casual learners a place to store and view their various learning projects.

Since launching its iPhone and iPad apps last year, the knowledge-sharing network has attracted more than 1 million users who are now using the platform to aggregate and share their projects across a range of topics. Grockit/Learnist co-founder Farb Nivi says that, long-term, he wants Learnist to become a “smart RSS feed for learning,” allowing anyone and everyone to share pieces of content and discover topics and lessons that are relevant to them. The goal, he says, is to build a library of quality crowdsourced content, surfacing content that matches users’ browsing patterns and areas of interest.

In the day or so that Learnist has been on Google Play, China has quickly become the largest source of downloads (outside of the U.S.) for the app. It’s this kind of international reach that Learnist hopes to tap into, adding to the 40 countries that its users represent today. Nivi believes that Learnist is now well-suited to provide a solution in regions where the demand for online learning is being pushed forward by growth in digital publishing and distribution tools and the rapid adoption of smart mobile technology.

With its new Android app, Learnist users can embed 40 different types of media in their learn boards, and with the recent launch of “Learnist SmartRSS,” users can now tap into content uploaded from the hundreds of media companies that have created profiles and are now publishing to Learnist. Looking ahead, users can expect Learnist to continue to hone its search and discovery tools, as it quietly becomes yet another entrant (see Noodle, for example) into the race to build a better search and discovery engine — with, in Learnist’s case, a digital clipboard in tow.

Posted by ImBlogCrazy at 5:59 PM