As It Stands blog: Bad News for Star Trek fans; Teleportation Not Happening!

Going where no man has gone before, the intrepid star travelers are going to have to stick to the good ship Enterprise when it comes to traveling.

Our scientists say that teleportation is not even within reach yet. As far as they’re concerned it never will be a viable mode of travel for humans.

It looks like Scotty is going to have to come up with another crazy space teleporter that defies what the experts think in order to keep Star Trek fans engaged.

Meanwhile, our military isn’t going to let the idea go, and are still monkeying around with hopes of beaming up Generals and tanks. What ever happened to ripping the veils of time apart and traveling that way? Hmmmmm…. 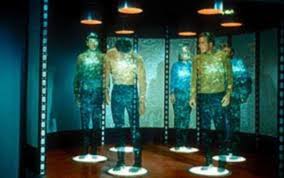 The trouble with teleportation: It could take quadrillions of years

“Bad news, "Star Trek" fans: Even if you found a way to teleport a human being, sending the required data would take longer than the age of the universe. At least that's what fourth-year physics students from the University of Leicester concluded in the latest of a series of studies on way-out topics.

Teleportation transmission rates get the technical treatment in the Journal of Physics Special Topics, an online publication created by the British university to answer burning questions on the fringes of science, such as: Could Batman really use a cape to fly? What would Han Solo see when he made the jump to hyperspace?” Read the rest of the story here.