All you have to do is kiss the NRA’s ass & you get a free shotgun! 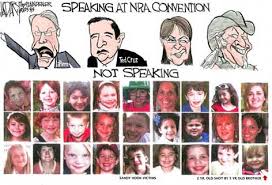 In the NRA’s never-ending saga of stupidity, nothing is too outlandish to bring sheep into the fold. The recent NRA Convention highlighted idiots like Sarah Palin and Mad Dog Wayne LaPierre spouting gun propaganda and pathetic platitudes on how much they love a warm gun.

What a sight! Over 400,000 square feet of exhibition hall dotted with 550 exhibitors flashing guns and the latest in ammo.

The attendees even carried guns. It was a real bonding moment for the paranoid set, like survivalists and members of paramilitary groups. Oh, there was women and children there too. It was like any family excursion, but everyone there was armed. Right down to little Johnny’s rifle with a scope and custom blue stock, and little Jane’s Ak-15 with a hot pink pistol grip and barrel.

Anyway…the corporations who fund the gun lobbies are always looking for new ways to stimulate business. Well, they came up with a doozy this time! They put together a non-profit group who give you a shotgun if you join the NRA and take a weapons training course.

Their goal is to put a shotgun in every home. That’s because they don’t feel there’s enough guns in circulation. Corporations plus NRA (an unholy couple) equal obscene profits and no accountability for the devastation they bring upon our society.

They will lie and tell say you’re 2nd Amendment is being threatened and the government is going to take away your guns. It’s not about that and they know it. The ends to which this unholy couple will go to recruit has no limit.

I give you the Armed Citizen Project:

“The Armed Citizen Project, a nonprofit group that arms residents living in high-crime cities, reportedly hopes to put shotguns in the hands of residents living in Chicago.The group is currently arming residents in the Houston and Tuscon areas, but made headlines after the National Rifle Association’s convention in Houston this weekend when they announced hoped for expansion into more than 15 cities, including Chicago, according to DNAinfo.com.

The group’s mission is to arm law-abiding citizens and train them in safety, legal, and tactical measures, according to ACP’s website. All participants who sign up and take the NRA training program will receive a shotgun, for free.” (Story here)