Who says we don’t have diplomatic relations with North Korea? 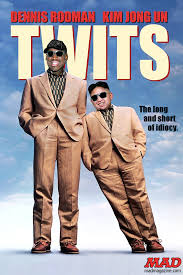 With the “Worm” giving the word to Kim Jong Un to let an American prisoner go, there should be no problems. After all, Dennis Rodman, aka the Worm (and other nicknames too graphic to give here) has an inside with North Korea’s chubby little dictator.

They both love basketball, although for the life of me I can’t see Un dribbling anywhere but on his food! Rodman even used street slang “do me a solid…” with Un who must have gotten a Readers Digest version of street slang in America when the Worm visited him recently.

Despite Rodman’s eloquent plea, there’s been no response from his new pal. Perhaps, when he goes back in August for another planned visit he could get Un to go one-on-one on the parquet floor for the American’s release?

Do they have any seven-footers that can play basketball in North Korea? Do they even have seven-footers in that country? If they do, then I suspect Un would have a stand-in for the competition. Just saying…

The important thing to remember is the Worm is an American, and he’s having open dialogue with North Korea’s pouting strongman. The dialogue would probably come across as a comedic opera to you and I, but these two oddballs see something in each other.

So far it’s basketball. Maybe someday they’ll put together North Korea’s first basketball team which could tour the United States on a spy fact-finding mission for the People’s Republic of North Korea!

Anythings possible, so don’t look down your nose at the Worm just yet… 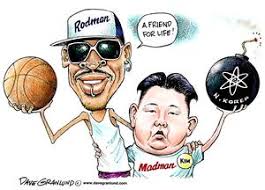 “Former NBA star Dennis Rodman is tapping his friendship with North Korean leader Kim Jong Un to ask for the release of a Korean-American man sentenced to 15 years of hard labor in the North.

"I'm calling on the Supreme Leader of North Korea or as I call him `Kim', to do me a solid and cut Kenneth Bae loose," Rodman said on Twitter. He later called the tweet a direct response to a Seattle Times editorial that dared him to ask Kim for the release if the two are really buddies.

Rodman visited North Korea in February and sat next to Kim as they watched an exhibition basketball game. His trip came at a time of high tension between Pyongyang and Washington and was not endorsed by the U.S. State Department.” (Full story)