The Rage Room: A Place Where You Get to Destroy Things For a Price 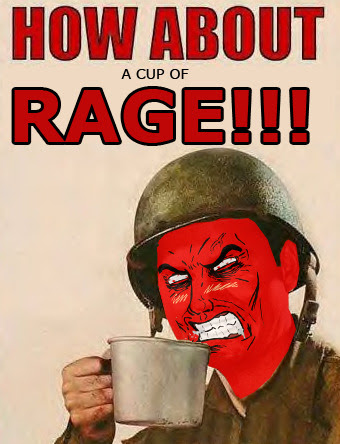 It feels so good.

Have you ever seen a fundraiser where you take a sledge hammer to a car for charity? Smash in windshields? A buck a whack or something like that? The same energy, where you get to destroy something without consequences, is being employed by some folks in Serbia for therapy purposes.

The whole idea is predicated on it’s better than getting into a fight – and you get to really let go for a modest price. Cheap therapy as it were. Beat the hell out of inanimate objects and you’ll reduce the stress in your life.

I don’t know. What do you think about this form of release?

“NOVI SAD, Serbia -- Savo Duvnjak looks around the room, lifts a metal baseball bat and wrecks everything in sight — bed, table, shelves, chair — until there's nothing left to wreck.

This isn't a criminal onslaught. It's the Rage Room.

And it's smashing its way to success in Serbia one angry visitor at a time. "This feels so good!" Duvnjak said sweating and panting, as he admired the mound of debris he created — for just a modest fee.

"I feel I let go of all my negative energy," the 18-year-old gushed. "This last year was a tough one and I wanted to end it with a bang!"

Since it opened in the northern Serbian city of Novi Sad in October, the Rage Room has drawn a flurry of attention in the Balkan country where two decades of war, political crisis and economic hardship have driven many people over the edge.

Inspiration from Texas
Inspired by a similar "Anger Room" in Dallas, Texas, Serbia's version was set up by two teens who saw the U.S. original online and figured it could be a way to earn pocket money.

Expert: Yoga 'more useful'
Sanja Marjanovic, a psychologist from Belgrade, said that modern science looks for ways to control frustrations before they explode into full-blown rage.

She explained that "venting anger does give you an immediate sense of relief but in the long run, one becomes accustomed to feeling angry."

"In a stressful situation, one can count to ten, or take calm, deep breaths," she said. "It's much more useful to practice yoga."

Pausic said each visitor must sign a document that includes a clause saying the Rage Room does not aspire to offer medical assistance.

And, after the session is over, customers are given a CD that includes information about professional therapists and how to contact them.

For his part, Duvnjak found therapeutic value in the Rage Room. He said the session helped to take off some of the pressure that had built up in his studies — adding that many of his friends felt the same way.

"This is better than getting into a fight," he concluded.” (Source)