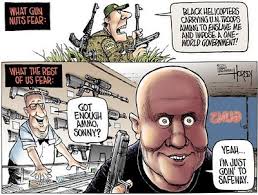 You gotta love the gun nuts. Accidently shooting someone at a gun show is not the best publicity right now for guns. They’re were just trying to show solidarity on National Gun Appreciation Day by demonstrating how safe guns were. That one accidently fired…well, it happens you know.

The shooter was hoping to privately sell the offending shotgun, but authorities said “Hell no,” after that incident. Only licensed gun dealers were able to peddle their wares afterward. I’m sure glad I wasn’t anywhere near those 200 good people parading around the legislative building in Raleigh. Who knows what would have happened if one of them would have fallen out of step…and accidently discharged their assault gun of choice? Can you say deadly chain reaction?

And on and on we go…

“Three people were wounded Saturday when a loaded gun accidentally discharged Saturday at a Raleigh, N.C., gun show, authorities said.Officials say Gary Lynn Wilson, 36, was having his personal shotgun checked prior to entering the Dixie Gun and Knife Show at the N.C. State Fairgrounds in Raleigh when the incident happened. He was unzipping his 12-gauge shotgun's case when it accidentally fired birdshot pellets, hitting three individuals, The News & Observer in Raleigh reported. Wilson was planning on privately selling the gun at the show, according to NBC affiliate WNCN.

The incident came on the first "National Gun Appreciation Day," which was organized by Political Media, a Republican consulting firm. In Raleigh, police say around 200 gun-rights supporters marched around the legislative building in downtown Raleigh on Saturday, The News & Observer reported.” (Source)

In Medina, Ohio, an exhibitor at a local gun show was opening a box containing a gun when the weapon went off, striking his partner, who was sitting next to him, NBC station WKYC of Cleveland reported.

In Indianapolis, said a 54-year-old man was loading his .45 caliber semi-automatic gun when he shot himself in the hand, The Associated Press reported. The victim, Emory L. Cozee, had been leaving the Indy 1500 Gun and Knife show at the state fairgrounds, officials told the AP. Loaded personal weapons are not permitted inside this show, according to the AP.